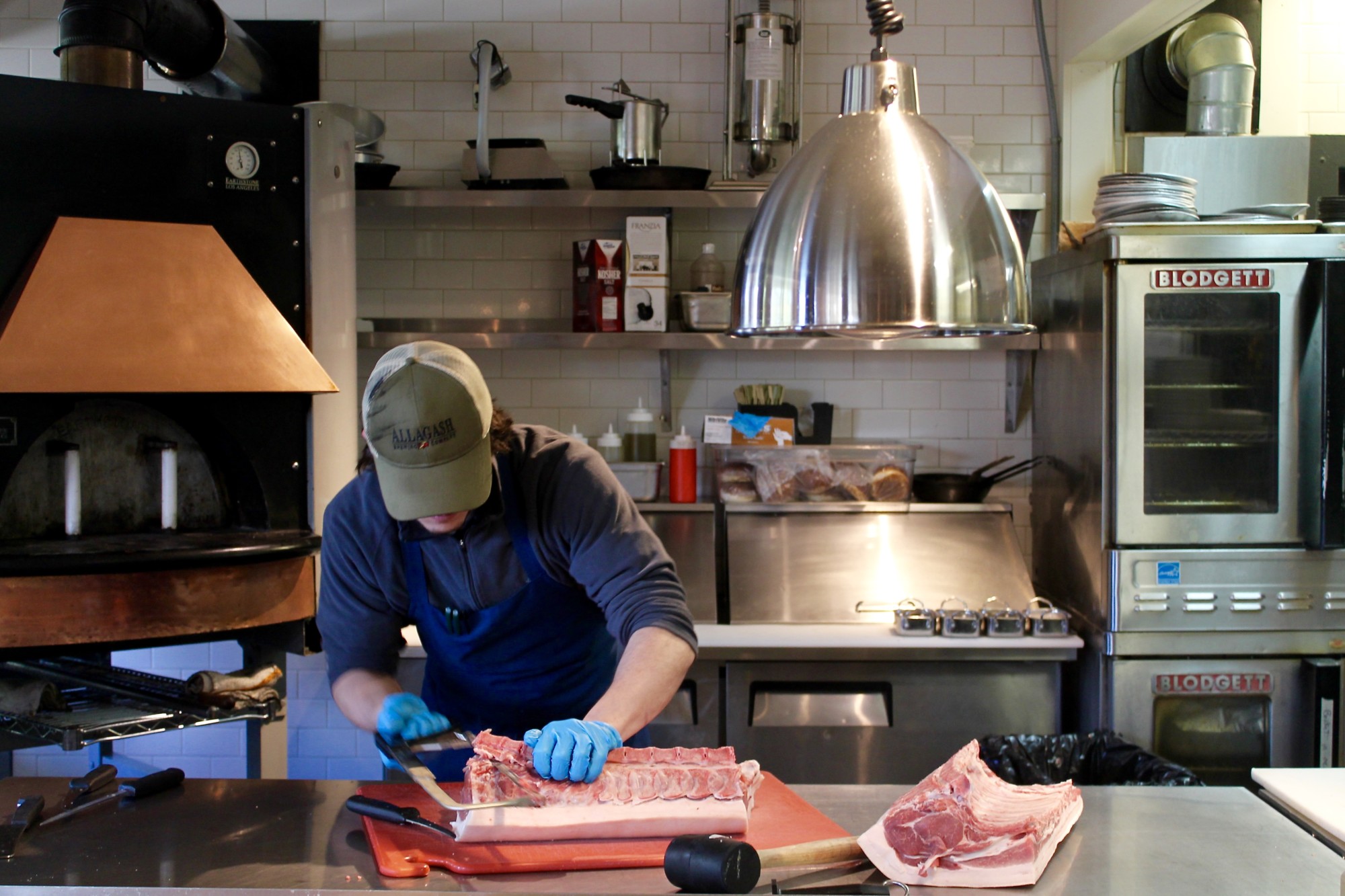 There is a place, just beyond Woodstock’s downtown bustle, where you can grab a cold glass of coveted beer, chow down on local farm-to-table offerings, and gather with friends or family. Worthy Kitchen is somewhat a phenomenon – a casual bar & kitchen that not only attracts the true locals (farmers, craftsmen, chefs, etc.), but also the town’s visitors (skiers, hikers, leaf peepers, etc.). Good brew and an extensive menu draw an eclectic, ultra cool crowd. It’s amazing to witness and partake in. Perhaps this is no surprise when we consider the group who began this venture just a few years ago… 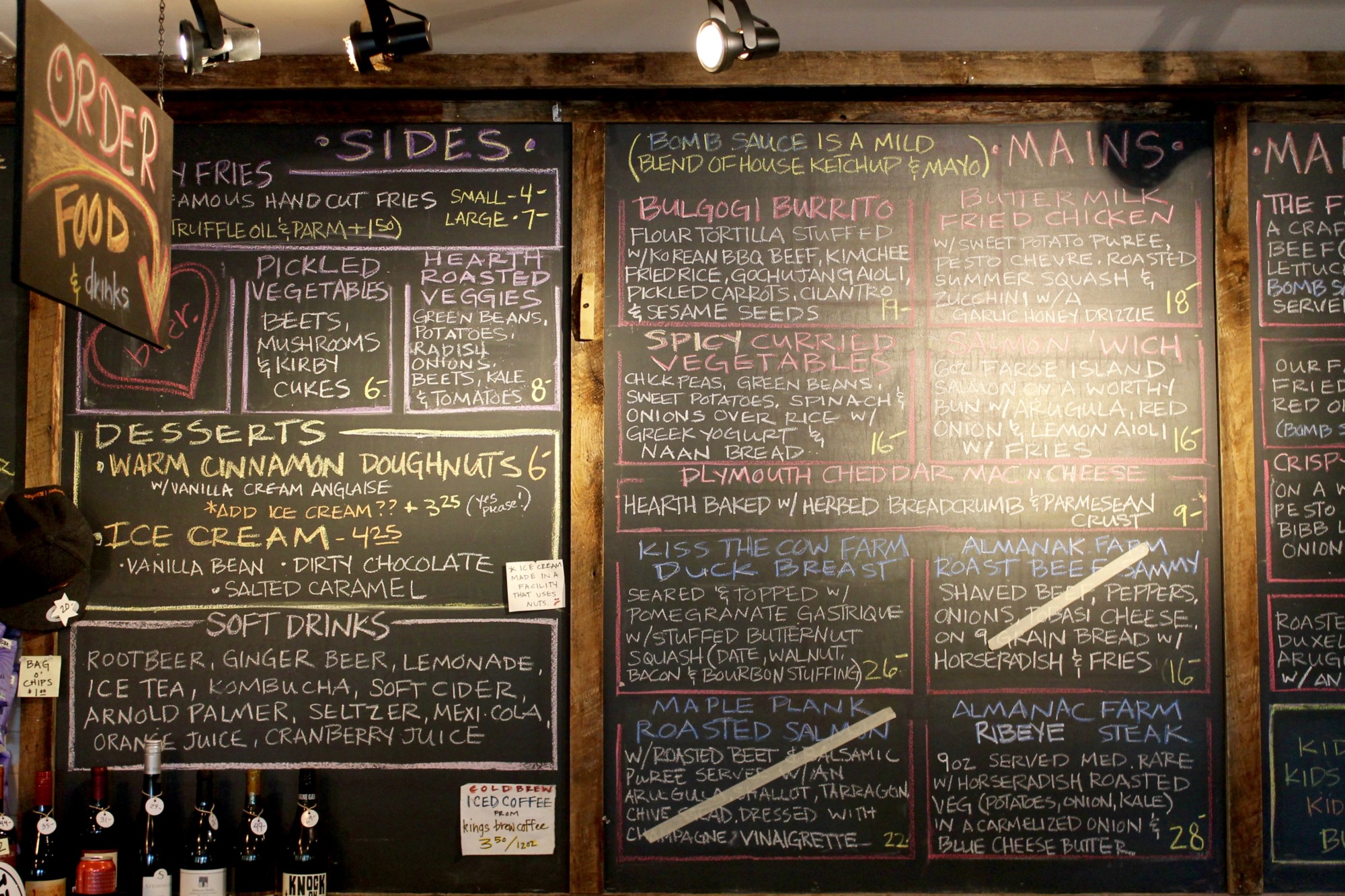 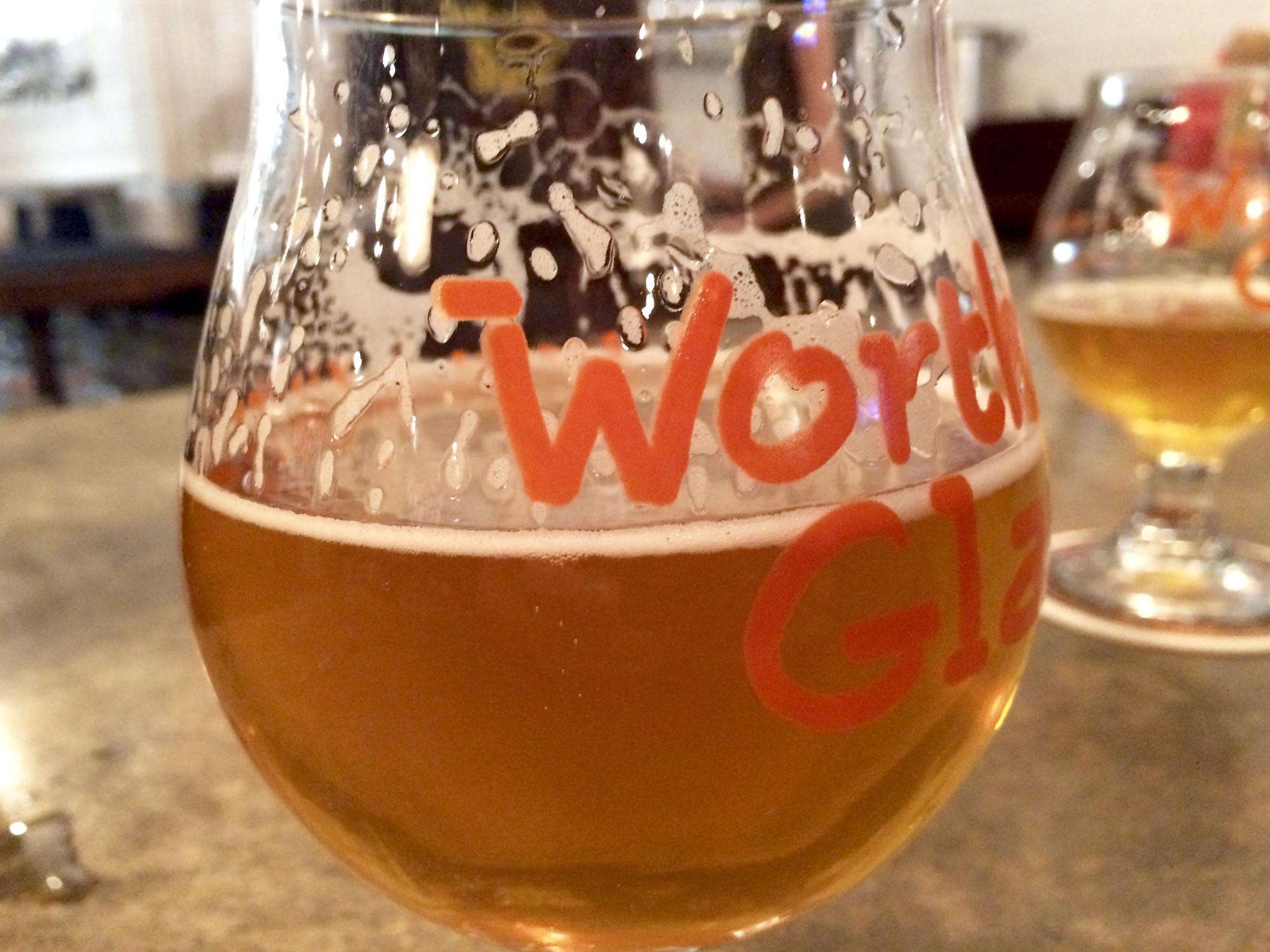 A diverse trio joined forces in 2011. Dave Brodrick (branding guru), Kurt Lessard (accounting buff), and Jason Merrill (talented chef) collaborated to create a restaurant consulting group called Lakeside Hospitality. Jason’s inside restaurant knowledge, combined with Dave and Kurt’s expertise, made the three confident in their ability to lead new and opening restaurants. After a year of purely consulting, however, the partners felt they needed a break, something to shake things up. And what better a way to do so than open their own burger bar – a place to exhibit their culminated talents in tangible form. Their idea-turned-reality resulted in Worthy Burger, which opened in 2012.

About a half hour from Woodstock, in South Royalton, the partners converted a 1850s railroad freight house into a high quality burger joint. The place, in all honesty, proved to be a bit difficult for diners to find. Jason remembers spray painting a big “WB” on a makeshift sign at the end of the driveway to help the situation. This sign stood for years before new signage replaced the well-worn marker. Still, this sign symbolizes the customers who came from near and far, even in the restaurant’s early days. People knew there was something exceptional in this burger joint, mainly the killer beer selection and special food preparation.

Throughout his many years in the culinary industry, Jason earned accolades and mastered unique skills. In fact, we are proud to say that Jason was head chef at the Jackson House Inn from 2004 to 2008, prior to our ownership. At the time, the inn offered dinner service. Conde Nast Traveler dubbed the restaurant Best in Vermont in 2004! On his way to earn this title, Jason learned the ancient art of wood firing – a particular skill that came in handy with the simple burgers he, Dave, and Kurt wanted Worthy Burger to become famous for. Wood firing supplies meat with a crunchy crust, seals in the juices, and adds Worthy’s signature smokey flavor. The act of massaging the fire, along with the specific wood used, acts as a differentiator for Worthy’s fare. Beyond this technique, Worthy’s use of high quality ingredients and collection of unique beers help create a more than “worthy” restaurant execution. 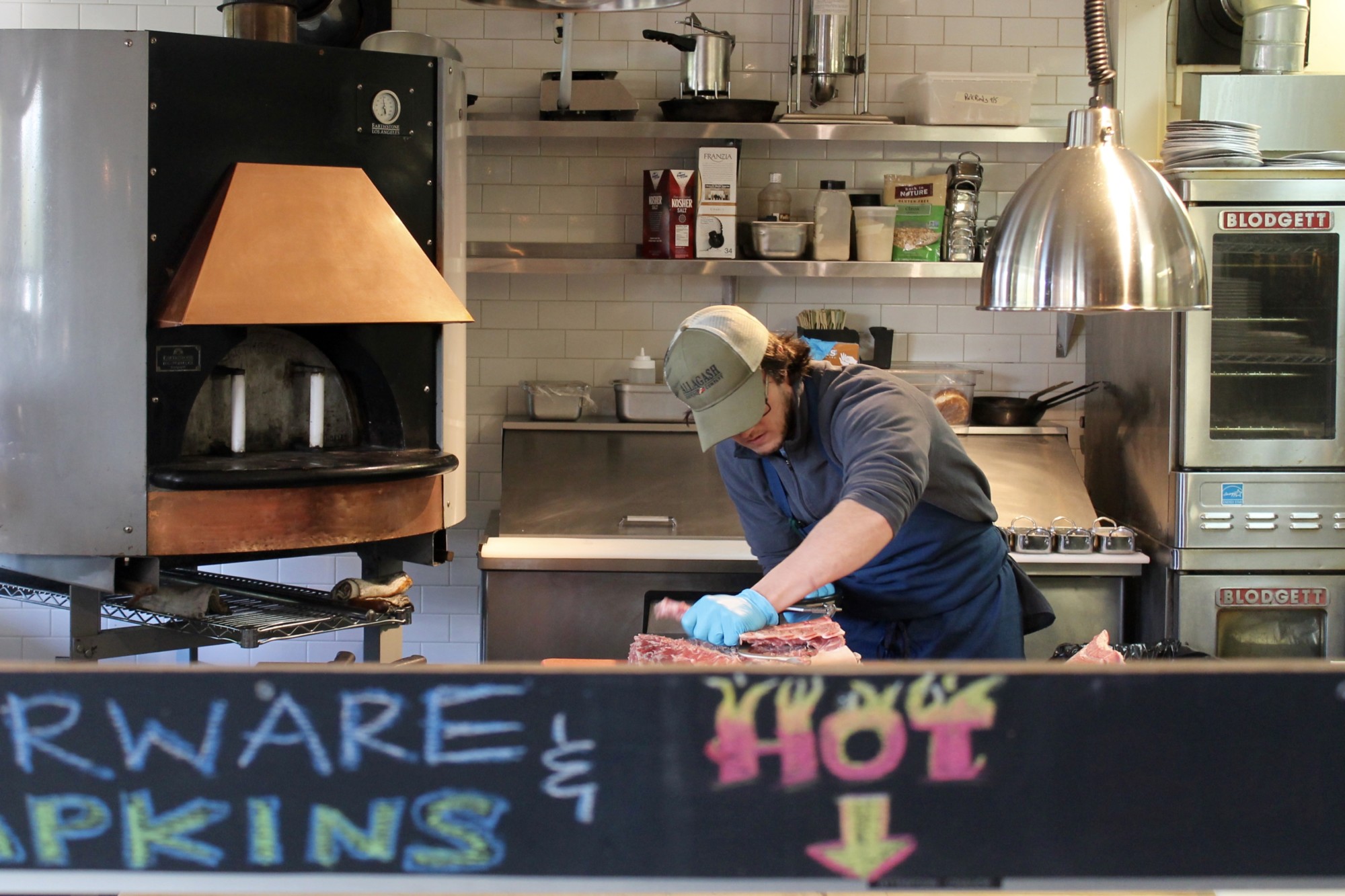 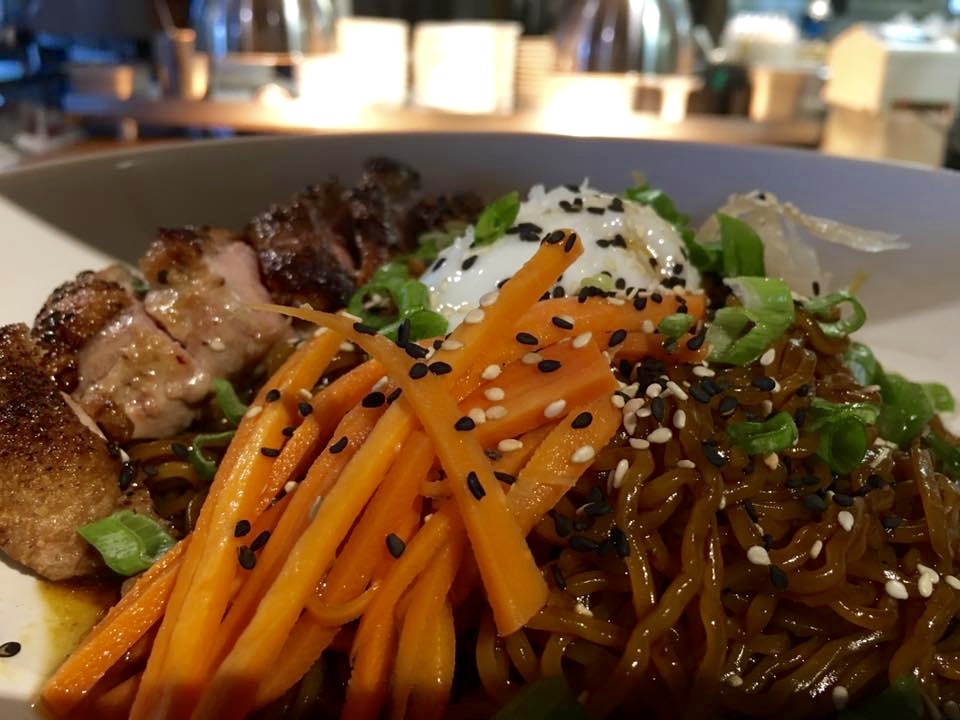 Worthy Kitchen opened the next year in Woodstock. Originally looking for a prep kitchen with takeout capabilities, Jason and his partners set out in search of a suitable space. They eventually found a location larger than they anticipated needing. They ran with the opportunity. Interestingly, the three threw around the idea of naming their new restaurant the Worthy Chicken Shack, revolved around a menu of various fried chicken dishes. After much discussion, they settled on a test kitchen objective instead – a place to test the various concepts each partner was curious to try. Voilà, Worthy Kitchen was born.

Worthy’s test kitchen appeal is reflected in its ever changing menu and also in its beer selection. Their chalkboard often dons mainstays such as the a Hill Farmstead, Idletyme, and Lawson’s Liquids rotation. Beer from the partners’ coffee-centric brewery, Beanery Brewing, is also often available, and certainly worth a taste. Alongside these staples, Jason and his crew do a good job of featuring new and interesting breweries from the area. In addition, Worthy’s menu tends to change with the seasonable produce available from local farms (all of which are listed on Worthy’s chalkboard). Two concepts, however, remain consistent at both the Burger and Kitchen. Fries are cooked in animal fat (yum!) and wood firing is used for as many menu items as possible. Our favorite eats from Worthy include the Bulgogi Burrito (save room for this puppy), the Plymouth Cheddar Mac & Cheese, and the ever popular Worthy Farm Burger.

This farm-to-diner restaurant is casual and cool in every sense. The Kitchen revolves around the concept of ordering at the counter and self pick-up. Its easy going design encourages mingling and movement throughout the restaurant, as well as the opportunity to go at your own pace … to stay as long as you’d like. Jason describes the Kitchen as “communal and laid back. A couple will come in together, spot a few friends, and before you know it, a whole group has taken over a table or two and they enjoy a great meal together.” This is what makes Worthy Kitchen so exceptional in our minds. The act of gathering happens practically every time we enter, whether it is anticipated or unexpected. And the thing people come to gather around is exactly what Jason, Dave, and Kurt have facilitated – excellent food, brew, and atmosphere. 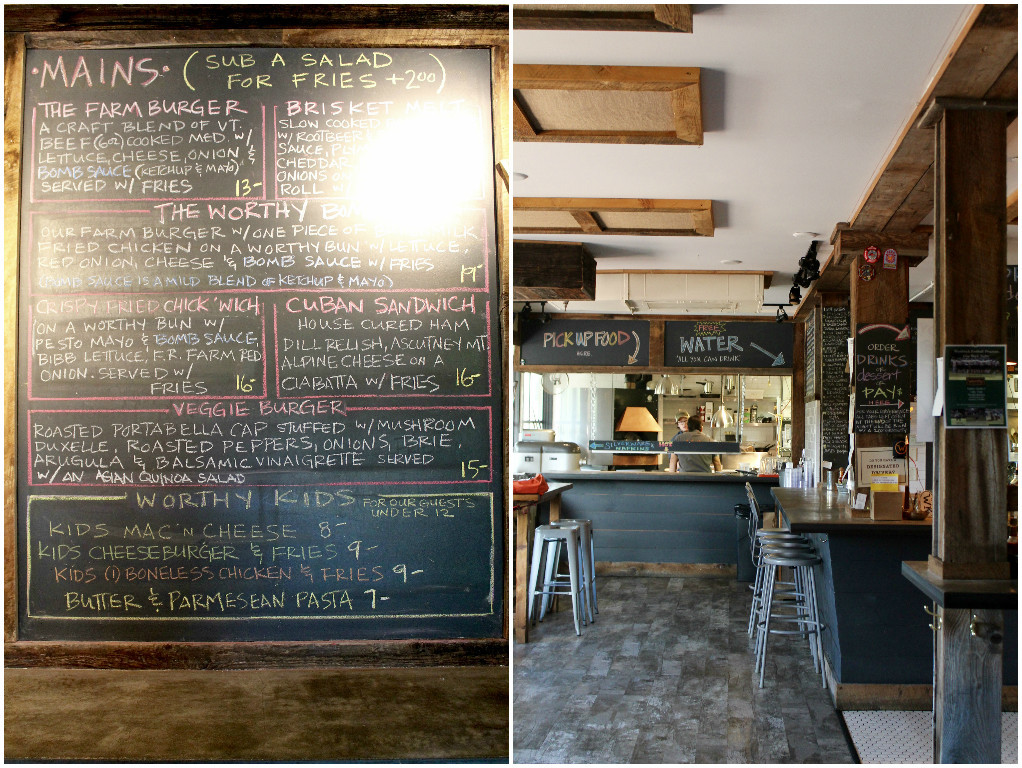 All in all, you can’t beat a night full of good company, beer from unbelievable Northeast breweries, and food that is wood fired to perfection. Pay a visit and see for yourself why Worthy has earned such rave reviews. Worthy Kitchen is open for dinner Monday through Friday beginning at 4PM, as well as Saturday and Sunday for lunch and dinner beginning at 11AM. Taste your way through Vermont – its agriculture and beer history are rich in this eatery. Enjoy and cheers!

Take a Hike in Woodstock – A Yoga Hike, that is!

Love is in the Air